Kayak speed: How fast is a kayak?

Our editorial team is supported by readers. Among other things, we link to selected online stores and partners from whom we may receive compensation. Learn more. 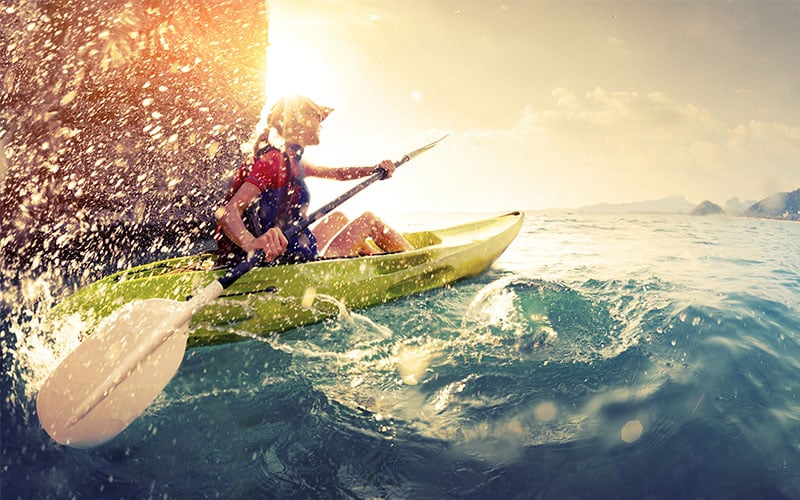 How fast is a kayak actually? This question often comes from paddlers who are just planning a longer trip.

For this purpose it is important to know what is the average speed with the kayak.

With the help of this value, the total distance can be divided into individual distances.

The daily distance is determined by the average speed. However, the maximum speed and average speed achievable with a kayak depend on many factors, but what values are realistic for the average kayaker?

Or: How fast is a kayak?

The average kayaker with some experience and a moderate fitness level will reach an average speed of 5 kilometers per hour.

Experienced paddlers can also reach average speeds of 6 to 7 kilometers per hour with a long kayak.

With the help of these values, a kayak trip of several days can be divided into individual sections, but what is the maximum speed you can go with a kayak? In fact, there are records in the Guinness Book of Records. In 2013, endurance athlete Brandon Nelson covered an incredible 244.4 kilometers in just one day.

He thus achieved an average speed of over 10 kilometers per hour – over a whole 24 hours. The average speed also includes the three times Nelson fell into the water during the record attempt.

The theoretical maximum speed with a kayak

With a waterline of 4 meters, the highest possible speed is therefore 9 km/h. On the other hand, a maximum of 10.55 km/h can be achieved with a 5.5-meter kayak. We should note that in a four-meter kayak hull speed is definitely a limitation.

Experienced paddlers can reach them and are slowed down accordingly. In the case of a 5.5-meter kayak, only a few really well-trained and experienced kayakers come close to the maximum speed of 10.55 km/h.

The relationship of kayak speed and the material

Acceleration is much easier with light boats. The low weight ensures that the kayaks react quickly and are generally very agile in the water. However, the handling characteristics are also more influenced by the wind and this can cause drifting.

In general, kayaks made of lightweight materials such as fiberglass, Kevlar or carbon are faster than PE kayak, which are very popular, especially among beginners, and also because they are very durable.

Therefore, those who aim at the high speeds or want to go on long tours, it is best to reach for a high-quality kayak material, which at the same time is not too heavy.

Solid kayaks made of fiberglass and co cost a little more, but are also much faster. A rule of thumb is that compared to a PE kayak, the GRP, Kelvlar or carbon models are 1 km/h faster.

The advantage of polyethylene kayaks, however, is that these boats are more forgiving of a collision or two due to their robust construction. Let’s come back to the speed difference. The value of 1 km/h does not sound like much at first. If you pronounce the difference in the full form, you already come to one kilometer per hour.

If you paddle one kilometer more every hour with the same amount of effort, you will reach your destination much faster. With five hours of paddling per day, that quickly makes the difference between two campsites. In addition, the extra speed will benefit you in countercurrents.

With a counter current of 2 km/h, you will cover two kilometers per hour at an average speed of 4 km/h in a PE kayak. With a lighter kayak, however, it would be three kilometers – already 50% more.

This small calculation example clearly shows that currents cannot be neglected in tour planning. In addition to the flow velocity of the water, the wind also plays a major role. There are no problems at all with wind speeds of 20 km/h or less.

For beginners, however, progress can be difficult with a headwind of 40 km/h (wind force 5 to 6). Looking at the weather forecast should therefore also be made part of the preparation. On open waters, of course, the swell also has a significant influence on average and maximum speed.

What does this mean for the daily mileage?

For tour planning, it is important to determine how many daily kilometers can be covered. When dividing an overall route into individual daily tours, estimating the average speed is therefore very important.

For the average kayaker who has done a few tours, the average speed is 5 kilometers per hour. As a rule, therefore, 10 to 20 daily kilometers can be expected.

For fit paddlers who have good paddling technique and are equipped with a long kayak, the true maximum limit can easily be double or triple that.

Of course, you don’t have to come close to the 244 kilometers Brandon Nelson covered on his world record attempt. However, the distance covered by Nelson is a good sign to see what is possible.

When planning the daily route, current speed, wind strength and the swell play an important role. The availability of rest areas must also be considered.

If there is a campsite every three kilometers along the route, it takes less planning than if you have to choose between two rest areas, each of which can only be reached via a turnoff from the route.

Do not forget: Transfer points and land transports

When scheduling, do not neglect the many small tasks. If you go on a kayak tour with a tent, you always have to allow a few minutes for setting up and taking down.

Checking in and out of the rest area and buying provisions also takes time. In addition, the cost of land transportation should not be neglected. Transfer points are not only exhausting, but also have to be considered in terms of time.

With water sports, you must always think about the weather. At the end of the day, it is an outdoor sport that is always dependent on wind and weather. Especially near the mountains, the weather can change in a few moments. What was sunshine a moment ago can turn into a heavy downpour a few minutes later.

Planning, of course, does not have to paint the devil on the wall. Much more, you should rather plan two days too much for a kayak tour of several weeks, so that you don’t have to drive as well in case of bad water.

To do this, don’t just divide the total distance into sections of equal length and assign them to individual days, otherwise you’ll have to get out on the water even in bad weather. But even if that’s the case, if you’re still well behind schedule, you can still make up ground in the rain with the right equipment.

On longer trips, average kayakers reach an average speed of 5 kilometers per hour. Factors such as experience with the sports equipment, fitness, the kayak and the weather influence this speed. Beginners are typically at 3 to 4 km/h. Experienced paddlers, on the other hand, can maintain a speed of 6 to 7 km/h or more.

The editorship of Wellenliebe.de consists of real water sports fans. From kayakers, sailors and divers to stand up paddlers, (almost) all water sports are represented. Our content has been read millions of times and has been picked up in many newspapers.

The editorship of Wellenliebe.de consists of real water sports fans. From kayakers, sailors and divers to stand up paddlers, (almost) all water sports are represented. Our content has been read millions of times and has been picked up in many newspapers.

Our editorial team is supported by readers. We link to selected online stores and partners, among others, from whom we may receive compensation.Learn more.

A project by Kuch Ventures GmbH